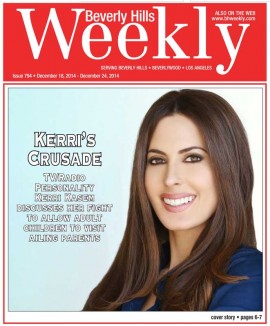 You and your brother Mike both attended Beverly High?

My brother Mike, my sister Julie and myself—we all attended Hawthorne. My brother and I both went to Beverly [High] for a short time, we did not graduate Beverly. We went to private schools after that.

Tell us about your crusade to pass AB2034, which would protect the right of children to visit ailing parents.

The bill AB2034 is dubbed the visitation bill, which Assemblyman Mike Gatto has taken on, authored, and really been a great advocate for. What it would allow a judge to do is just rule on visitation because right now there’s a gap—you have to have a conservatorship or a durable power of health to actually get into the court and fight to make decisions for your loved ones and fight to see them. And that can cost upwards of $100,000 to $300,000 with no guarantee that you’ll ever see your ailing parent again. What this bill would do is just allow a judge to rule on visitation. So, like in my case, my father said loud and clear to the court, “I want to see my children.” Judge Leslie Green said, “Do you hear that? Casey wants to see his kids, now go figure it out.”

“Now go figure it out” is the worst thing you can say to people who have spent six months trying to see their father because their stepmom, his wife, would not let us see him. So we’ve tried to figure it out, judge, we’ve done everything we could— it’s not going to happen. My stepmother has lied to the press saying we’re estranged, that we borrowed money, that we’re not good kids.

So there was no ability for the judge to rule on visitation or not, even though my dad said, “I want to see my children.” She could not rule on it. Instead, we had this mediation back and forth, my stepmother said if you drop your entire case and the conservatorship bid I will let you see your father, once a month, for an hour, with a guard in the room, and you are not allowed to bring a phone, camera, computer, you can sit with him one at a time—you are not allowed to all go in together.

So my sister and brother decided that they wanted to sign that. And I said, there’s no way in hell I’m going to sign anything like that and I continued to fight and I eventually won conservatorship.

So instead of going through all that mess, a judge, with AB2034, the visitation bill, would say “Hey, you know what, we think these kids deserve visitation or we don’t.” So at least she would be able to decide because right now she cannot adjudicate on any of that. There’s nothing in the law books that allows her to.

How did you find Assemblymember Mike Gatto (D-Glendale) to sponsor it?
Mike Gatto’s office called me and they eventually took the bill on. Gatto said that through my advocacy—I was all over radio, I was all over TV saying we’ve got to do something about this and he said he’s going to help me. And he took the bill on. He worked with my lawyer, who’s the one who won me the conservatorship, he worked with my stepfather, who’s a lawyer and a lobbyist up in Sacramento. So my stepdad is my lobbyist. We really did what we could for this bill and I think it’s going to be passed this year.

What advice do you have for other families in a similar situation?
Advice I give to people who think they might be in a situation like this or don’t get along with family members or don’t get along with—whether it’s your mom or dad or second wife or second husband, whatever it may be—is please, get your estate plans. It may not protect you completely but at least it will get you through the door in court. And then it could be fought there.

Now this is where my bill would come in—at this point, instead of spending the hundreds of thousands of dollars going back and forth or not even getting to court because you don’t have that money, you could ask a judge for visitation and explain what’s going on. So, what I would do is please get your estate plan, your will, get your durable power and video tape all of it.

And then, support my bill. Get out there— you can do what I’m doing, too. It doesn’t just have to be me. Call me up, write me at www.kasemcaresfoundation.org, find me anywhere on social media. And I will get this bill started in your state. I’m one person and I need help. I’ve had many people call me and say “Hey I know this assemblymember, I know this senator” and that’s why it’s in five different states. Also, donate—it’s so important.

Since day one, since we were very little kids, [my stepmother] has made it very clear that we’re not part of her family. Very clear. We were not invited to the wedding, in fact, there were times when we were all together—my brother, my sister, me, my father and her–and [my father] would walk out of the room, he’d walked back in, and she’d tell him that we’d done something to her. And I remember one time my father smacked my brother because of something Jean said he had done to her, and he hadn’t. So this is what we’re dealing with.

When I was a kid I had a sleepy toy that I slept with, it was a penguin, and he got chewed up by my dog. And we saw my dad every Friday, Saturday and Sunday; we were with my mom on the weekdays. [My stepmother] said leave him with me, I love to sew, I’ll fix your penguin right up, just leave him. And it’s like living my sleepy toy, my blanket, my safety blanket with her. I wanted her to like me so bad that I left it. She had thrown it to her dogs when I came back and I said, “Dad, my penguin!” The memory burned into my brain. That’s what we’re dealing with—I was eight years old. This has been around for a long time—this is 34 years of it. And I’m done. And justice is going to be served, it will be served, one way or another.

Tell us about your Kasem Cares foundation.
The Kasem Cares Foundation is just here to support the visitation bill and in California AB2034— just to really push it so we can get into all 50 states. It’s so important that children and siblings get to see their loved ones before they die. And not everybody is going to deserve that. We know that there are bad seeds out there and there might be kids that are toxic. But for the most part, especially if someone’s dying, even if you didn’t have a great relationship, you want to say bye, you want to say sorry, you want to make amends, whatever it may be. So to stop that and to let that person die thinking you never wanted to see them again is horrific for the person dying and for the person that lives. You’ll regret that for the rest of your life.

We hold little fundraisers around Los Angeles and Orange County and people have contacted me that they want to get this bill started and they’re raising funds as well and now we have the bill in five different states. And there are little fundraisers going and if there’s a fundraiser and you want to donate there’s a guy here—fantastic, generous man—who does these Harley rides. Whether it’s a ride from here to Santa Barbara or Camarillo—he’s done events like that for us and part of the proceeds and tickets go to Kasem Cares foundation.

Another woman, this last weekend, did an event where part of the tickets went to the Kasem Cares Foundation, it was a fashion show. So people have raised money that way which is so helpful.

We’ve had people for their birthday, instead of a birthday gift, ask to please give to the Kasem Cares Foundation. We have a lady who does car rides—you can get in a real Nascar. And anytime people bought tickets they gave to us as well.

“There was no ability for the judge to rule on visitation or not, even though my dad said, “I want to see my children.” She could not rule on it.” –TV/Radio Personality Kerri Kasem

Aside from being an activist and a TV and radio personality, you also own a vapor store in Beverly Hills. Tell us about that.
The vapor that I sell here is different from the disposable e-cigarettes. A lot of the disposable e-cigarettes have liquid made in China, which has got a lot of chemicals in it that are not good for you. We have an organic store here. In fact, Dr. Joel Nitzkin, Chair of the Tobacco Control Task Force for the American Association of Public Health Physicians concluded that, “If we all get tobacco smokers to switch from regular cigarettes to electronic cigarettes we would eventually reduce that death toll from 400,000 a year to less than 4000 a year, maybe as low as 400 a year.”

People aren’t talking about the real studies that are coming out. Look at the Drexel University study where it says that there’s no such thing as secondhand vapor. Look at the Oxford University study where they took 9,000 people and during that year people who switched from tobacco to vapor, their cardiovascular systems and their lungs were healing.

So look at the good studies—look at the real studies. Don’t listen to the propaganda and the tobacco lobbyists—they’re killing people and they want to keep killing people. Both of my grandmothers died of smoking, lung cancer. And my boyfriend was a smoker for five years and this is the only thing to get him off of it. So, while putting nothing in your lungs is best, this can save your life. And for anybody who’s against it: shame on them for not doing their research and listening to the tobacco companies and the tobacco lobbyists. Shame on the politicians for not doing their research.

PREV
NEXT
We may use cookies to ensure that we give you the best experience on our website. If you continue to use this site we will assume that you are happy with it.OkPrivacy policy